Seat Belts Save Lives But Cause Neck and Back Injuries.

The safety value of automobile seatbelts has been proven. They save lives !!!  At the same time, it has been well established in the medical literature that seatbelts are capable of producing serious injuries to the spine, abdomen, and chest.

The trauma to the spine (neck and back) has been produced by severe flexion of the torso over the belt, causing a tearing of the structures of the spine, including the muscles, ligaments, nerves, intervertebral discs and can even produce fractures of the spinal vertebrae.  This happens because the forces of the collision are focused on the point where part of the body is restrained and part not restrained.  (This is especially true in the upper back, where the three point seat belt system causes a violent twisting.  In the lower back, the seat belt restrains the lumbar spine at the point of the seat belt, causing a focus of the forces at the level immediately above.)

The Schmidt-Salita Law Team has handled several cases in which motor vehicle collision victims have sustained serious injuries to the sternum, including fractures, even though wearing a 3-point seat belt at the time.  (The use of a 4 point restraint system, as used by race car drivers, would avoid many of these consequences.)

Following seatbelt trauma to the abdomen, significant internal injuries can occur, including perforation of the small bowel and hernias of the abdominal musculature.  Occupants who already have a health condition of the abdomen are at special risk. 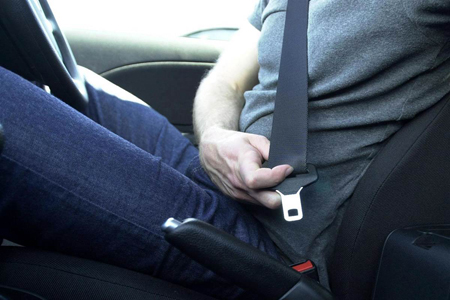