CAR ACCIDENTS CAUSE WHIPLASH INJURIES TO THE BRAIN AND SPINE

The statistics regarding car crashes are sobering:

REAR END COLLISIONS ARE A MAJOR CAUSE OF WHIPLASH INJURIES.

Rear end collisions, where the “target” car is struck from behind by another car, are major causes of whiplash injuries. Even minor impacts with closing speeds of 10 miles per hour cause whiplash injury to one-third of the occupants. One study estimated that 1.4 million people sustain a whiplash injury each year.

Rear end collisions cause the target car to be violently pushed forward. Occupants who are seat-belted to the car seat have their torso pushed violently forward. At the same time, their head is not restrained and is violently pushed rearward, sometimes striking the head rest and in many cases actually flying over the top of the headrest.

The forces pushing the torso forward while the head is flying backwards cause the whiplash injury. Rotational forces caused by the head being turned at the time of impact increase the severity of the whiplash injury. Croft, Whiplash and Mild Traumatic Brain Injuries, Spine Research Institute of San Diego, 2009.

Manufacturers are working hard to minimize the amount of property damage in car crashes. The bottom line is that the vehicles are becoming more resistant to damage resulting in the forces of the impact causing less visible damage – but in turn the same or more force causes whiplash injuries to the neck and head.

WHIPLASH INJURIES ARE NO JOKE – THEY CAN BE SERIOUS.

Neck strain/sprain is the most common type of injury to motor vehicle occupants treated in U.S. hospital emergency rooms.

Many whiplash injury victims do not seek immediate medical care. Whiplash symptoms are well known to develop progressively over hours and days after the crash. This makes perfect sense: anyone who has “overdone” physical activity in a work event or a sporting event has experienced the pain and stiffness being worse in the next several days after the event. Dr. Arthur Croft of the Spine Research Institute of  San Diego reviewed 80 different studies that have been reported in the medical literature and concluded that reliable studies indicate that 86% of whiplash victims were still having symptoms one year later. Another study reported that 55% of whiplash victims had disability symptoms, including neck pain, radiating pain, and headaches 17 years after the incident.

The normal and healthy function of the cervical spine is critical and vital.

The important functions of the cervical spine should not be minimized. The cervical spine supports the head and brain. It protects the spinal cord and the supply of neurological function to the remainder of the body. It protects the blood supply flowing through the subclavian and carotid arteries to the head and brain. It provides movement of the head in relation to the body proper, allowing for functions such as proprioception, balance and vision.

Ligaments actually play a passive/protective role, becoming taut only during the extreme ranges of motion and controlling the “end play” to prevent pathologically extreme movement. In other words, they are intended to prevent excessive movement of the joints in the body – but they fail when stretched too far.

It is well known that ligament damage is at the core of all Cervical Acceleration/Deceleration injuries (CAD also known as flexion/extension injuries or “whiplash” injuries).

The system of ligaments in the vertebral column, working in conjunction with the muscle, intervertebral discs, and tendons, provides the structural integrity of the spinal column. Ligaments provide a natural brace, aid in joint stability (especially in movement) and, when healthy, protect against abnormal movements in hyperextension and/or hyperflexion. White/Panjabi, Clinical Biomechanics of the Spine, Lippicott Co., 1978.

As noted in the highly respected textbook by Foreman and Croft:

“Ligaments and related structures such as the fascia and the discs are also damaged or disrupted in CAD trauma. Both the ALL (Anterior Longitudinal Ligament) and the posterior ligamentous complex (intervertebral disc, zygapophyseal joint capsules, posterior longitudinal ligament, ligamentous flavum, interspinous ligament, and the ligamentum nuchae) have been shown experimentally…to rupture, either partially or completely.

“Ligaments of the upper cervical spine, such as a cruciform ligament, the suspensory and apical ligaments of the dens, and the alar ligaments also have been found to be ruptured or disrupted.”

In rear-end crashes, the force of the impacting vehicle drives the car forward violently, with the seatback pushing the torso of the occupants forward. The head is not restrained and is forced backwards. Foreman & Croft, Whiplash Injuries – The Cervical Acceleration/Deceleration Syndrome, 3d. Ed., Lippincott, Williams, Wilkens, 2002. See also Croft, Whiplash and Mild Traumatic Brain Injuries – A Guide for Patients and Practitioners, Spine Research Institute of San Diego Press, 2009.

Injury to the ligaments of the cervical spine are “well-established features” of whiplash trauma resulting in joint laxity and spinal instability. This condition is typically not detectable with static X-rays or MRI’s and CT scans. Videoflouroscopy (digital motion X-ray) allows for examination in movement which can reveal the abnormalities of intervertebral motion associated with ligamentous instability. Freeman, Diagnostic Accuracy of Videofluoroscopy for Symptomatic Cervical Spine Injury Following Whiplash Trauma, Int. J. Env. Res. Public Health, 2020.

One of the most common injuries in motor vehicle crashes is that of soft tissue injuries of the cervical spine. Even low speed collisions can cause deformations due to abnormal stretching of the cervical ligaments beyond their natural physiological range of motion. Trajkovski, Analysis of the Mechanical Response of Damaged Human Cervical Spine Ligaments, Clinical Biomechanics, Vol. 75 (2020). See also Schmidt, Diagnosis and Treatment of Ligamentous Injuries of the Cervical Spine, 3rd Ed., S&S Publ., (2020).

THE SYMPTOMS OF WHIPLASH INJURY CAN BE VERY DISABLING.

The common symptoms of whiplash injuries include the following:

1. WHIPLASH INJURIES TO THE NECK AND BACK.

Whiplash injuries to the neck and back occur when the foreword-backward movement of the neck and back stretches muscles, ligaments, nerves, and intervertebral discs beyond their normal anatomic range of motion. The result is injury, which can result in permanent disability. For more information on whiplash injury, we direct your attention to this article.

2. WHIPLASH INJURIES TO THE BRAIN.

The same whiplash forces into the neck and back can further cause “whiplash of the brain”, also known as a concussion injury. The symptoms include headaches, dizziness, fatigue, weakness, and mental disorder and mental disorganization. Recent studies show that  concussion injuries are heavily associated with long-term cognitive problems such as reduced memory, concentration comprehension, and multitasking abilities.

Other studies show that 50% of all concussion injuries are not immediately diagnosed and develop progressively over a period of days, weeks and even months.

Posttraumatic stress disorder is a condition of persistent medic, mental and emotional stress occurring as a result of an injury or severe psychological shock caused by exposure to a dangerous event or witnessing serious injury to another person. The symptoms typically involve constant vivid recall from the experience, disturbance of sleep, panic attacks, sleep difficulties, and avoidance of activities. 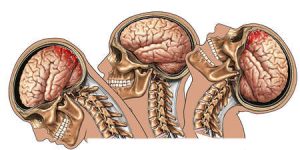 The highest and best recommendation that any lawyer can achieve is that of recommendations by happy and satisfied clients who have personally experienced the quality of the services offered by the lawyers. Recommendations from happy and satisfied clients are very strong indicators of a law firm’s work ethic. We follow this mantra at the Schmidt Salita Law Team – we are proud to be 5-star rated thanks to our happy clients. The personal injury lawyers at the Schmidt Salita Law Team have 70 years experience collectively in the successful representation of the victims of concussion, whiplash and PTSD injuries.

Respected by Judges, Lawyers and Claims Adjusters – Award of Merit & Other Awards

Schmidt Salita lawyer Doug Schmidt is also the recipient of the Distinguished Service Award from the Minnesota Trial Lawyers Association.

Similarly, Senior trial lawyer Dean Salita has been recognized as a Super Lawyer and maintains the highest rating of “AV” rated by Martindale Hubbell. He currently serves as the Chairman of the Workers’ Compensation Committee for the Minnesota Association of Justice. He has an excellent track record of bringing great settlements to his clients’ cases.

Schmidt Salita Law Team is reviewed and recommended by Expertise.com. The Team is certified as having an “A+” for professionalism, and an “A+” for reputation.

The exceptional track record of Schmidt Salita Law Team speaks for itself with over 70 years of experience in over 10,000 cases, producing over $100 million in recoveries for their clients. The Car Accident Lawyers at the Schmidt Salita Law Team are dedicated to providing legal services with personal attention and care to each case.

The Workers’ Compensation Lawyers at the Schmidt Salita Law Team understand that the victims of personal injury are often dealing with financial issues due to medical bills, car damage, and lost wages and earnings. Most do not have the financial resources to pay for a lawyer on an hourly basis – especially for a really good lawyer. The answer to this dilemma is the contingent fee contract where the lawyer doesn’t get paid by the hour. Instead, the lawyer gets paid on a “commission basis” like a real estate agent, as a percentage of the settlement produced. The Schmidt Salita Law Team offers contingent fee contracts in most cases.