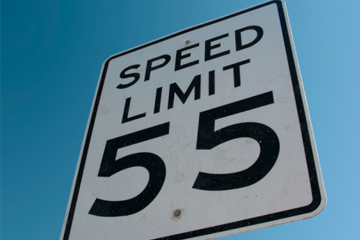 The House Research publication authored by Matt Burress recently summarized the speed laws applicable to the roads and streets of Minnesota as follows:

Default Minnesota speed limits are set by state statute, and there are various circumstances where they can be modified. The statutory speed limits are: 65 m.p.h. or 70 m.p.h. for interstates (depending on whether it is, respectively, within or outside an urbanized area of at least 50,000); 65 m.p.h. on divided highways with controlled access; 30 m.p.h. in an “urban district,” which is any segment of a city street or town road with structures spaced less than 100 feet apart for a minimum distance of a quarter-mile; 10 m.p.h. for alleys, mobile home parks, and campgrounds; and a 55 m.p.h. default on other roads. Minn. Stat.§§ 169.011; 169.14, subd. 2; 327.27, subd. 2.

State law also mandates that “no person shall drive a vehicle on a highway at a speed greater than is reasonable and prudent under the conditions.” Minn. Stat. § 169.14, subd. 1. The provision can obligate a motorist to lower the speed of travel below the limit, particularly if there are dangerous conditions such as snow.

The Minnesota Department of Transportation (MnDOT) has the authority to establish speed zones in which the speed limit is higher or lower than those set in statute. Zones can be established after MnDOT conducts an engineering and traffic investigation, which analyzes factors like roadway design and characteristics, traffic volume, crash history, and observed speeds. While accounting for other conditions, MnDOT’s policy is that the limit should normally be set near the 85th percentile of vehicle speeds (that is, the speed at or below which 85 percent of vehicles travel). Minn. Stat. § 169.14, subd. 5.

Cities, counties, and towns have limited power to set speed limits on streets and highways under their own jurisdiction. If requested by a local road authority, MnDOT performs an engineering and traffic study of the road. However, MnDOT-not the local authority-determines the safe and reasonable speed limit as well as whether to establish a speed zone.

There are some exceptions that provide for adjusting the statutory speed limits.

Without an engineering and traffic study, both MnDOT and local road authorities can reduce the limits when workers are present, with restrictions on the extent of a reduction that depend on the existing limit

Speeding is generally a petty misdemeanor, carrying a base fine that normally ranges from $40 to $150, and no prison sentence. The fine is $300 for a violation in a work zone. The fine is doubled if the violation (1) occurs in a school zone, (2) involves speeds of 20 m.p.h. or more above the posted limit, or (3) occurs when passing a parked emergency vehicle with flashing lights. If a speeding violation is committed in a manner that endangers persons or property, it can be charged as a misdemeanor. In addition to the base fine, a $75 court surcharge is imposed for speeding convictions and there can be a law library fee. Minn. Stat.§ 169.14; 169.89, subd. I; 357.021, subd. 6.

A driver’s license will be revoked for at least six months for driving over 100 mph Minnesota does not use a point system that triggers removal of driving privileges. However, multiple speeding or other traffic violations within a year can lead to the loss of a license. Minn. Stat. §§ 169.14, subd. la; 169.89; 17.

Violations on a Driver’s Record

A provision (originally known as the “Dimler amendment”) governs when speeding violations are recorded on the motorist’s driving record maintained by the Department of Public Safety (DPS). Minn. Stat.§ 171.12, subd. 6. Records are accessible to insurance companies. The courts keep records separately.

Speeding violations stay off of a DPS driving record if the driver did not exceed:

The Schmidt Salita Law Team has offices through out the State of Minnesota.  Its primary location is at Ridgedale Office Center in Minnetonka, near the intersection of I394 and I494.  The offices offer handicap accessible with ample parking.