“THE DANGERS OF DRIVING AT NIGHT INCLUDE DROWSY, FATIGUED, and
TIRED DRIVING -which causes injuries and death.”

The Schmidt & Salita Law Team says that the feeling may be familiar:

You’re driving along late a night on a near-empty road. It’s warm, and you’re feeling comfortable. You’re feeling relaxed when suddenly your eyes start to get heavy and you find yourself losing concentration.

The Schmidt & Salita Car Accident Lawyers say that “If that has happened to you, you’re not alone.”  According to a report by the U.S. Center for Disease Control, 1 in 25 adult drivers (18 years or older) report having fallen asleep in the last month. 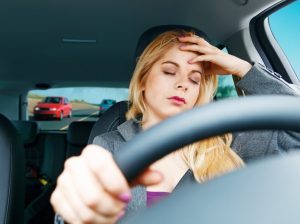 In fact, the National Highway Traffic Safety Administration estimates that “drowsy driving was responsible for 72,000 crashes, 44,000 injuries, and 800 deaths in 2013.”

THE NUMBERS MAY ACTUALLY BE EVEN HIGHER; SOME REPORTS SUGGEST UP TO 6,000 FATAL CRASHES EACH YEAR MAY BE THE RESULT OF TIRED DRIVERS.

One of the biggest factors causing a rise in drowsy driving is the fact that we sleep less as a society, and the sleep we do get is not of a high enough quality. As the CDC show in the graph below, getting 6 hours of sleep a night or less more than doubles your chances of falling asleep at the wheel.

Snoring is a major correlatory factor, indicating potential sleep apnea, and a general loss of sleep quality. One of the most common recommendations from the CDC and the NHTSA is for drivers who regularly experience drowsiness to get a medical checkup, as there are often underlying medical issues when sleep quality is diminished.

The rise of smartphones and other technology, combined with social media has diminished the quality of sleep throughout the United States. The average circadian rhythm length is around 24 hours, and those who view smartphone light before bed upset their circadian rhythm by exposing themselves to blue light.

Studies are still relatively new in the field, but one hypothesis is that blue light tricks the brain into perceiving daylight and therefore upsetting the release of the chemical melatonin in the brain. This plays a major role in sleep quality.

So being on your smartphone before bed not only keeps you up later but diminishes the quality of your sleep. As a rule of thumb, don’t look at a screen an hour before bed to avoid any major impact on your circadian rhythm.

Although today’s modern world is ever-more demanding of our attention, and the lure of smartphones keeps us up late, drowsy driving isn’t inevitable.

KNOWING HOW TO PREVENT IT, AND HOW TO RESPOND IF YOU DO FEEL DROWSY CAN HELP KEEP YOU AWAKE AND ALERT ON THE ROADS.

WHAT ARE THE STATISTICS ON DROWSY DRIVING?

WHO IS MOST LIKELY TO DRIVE DROWSY?

Studies have consistently shown that driving drowsy regularly affects the same segments of the population. If you fit one of these profiles, then you should examine your driving habits to see if you’re guilty of driving while drowsy.

Those who drive vehicles like tow trucks, tractors trailers and buses have to drive for a living, so a poor night’s sleep, or illness, does not give them the option to work from home. In addition, those who work long hours are more likely to be pushing themselves beyond their limits. In particular, long-distance truck drivers are likely to strive to reach their destination rather than resting.

People who work the night or evening shifts often have disrupted sleep patterns, and have upset their circadian rhythm. This makes them far more likely to be driving while drowsy, particularly during the late-night/early morning hours.

An estimated 22 million Americans have sleep apnea, with 80% being undiagnosed. This means that there are around 18 million drivers who are susceptible to sleep apnea without them even realizing it.

According to the U.S. Census Bureau, the average American commute time is 26 minutes each way, or nearly 1 hour a day. For those who have longer commutes, often requiring them to get up early and get home late, there is a real danger of drowsy driving.

WHAT ARE THE WARNING SIGNS?

Knowing you are getting drowsy is often harder than it may seem; you often only realize too late that you are losing focus and attention and you are starting to feel sleepy. Look out for the following signs.

Yawning is one of the most obvious signs that you are starting to fall asleep. Blinking, or feeling that your eyes are itchy (or just generally rubbing your eyes) is also a sign. You will often start rubbing your eyes long before you notice it.

‘Blanking’ on what has happened in the last few minutes is a sure sign your attention span has diminished, and you’re not focusing on the road. It doesn’t mean you were asleep, just that your brain isn’t storing information as it usually does.

Again, not being able to hold thoughts for too long in your head shows you’re getting drowsy, and missing your exit is certainly a symptom of improper memory and cognitive function.

DRIFTING FROM YOUR LANE/HITTING A RUMBLE STRIP

Drifting out of your lane can be extremely dangerous when driving. If you’re on the freeway, you may shock yourself by hitting a rumble strip and causing a loud juddering noise in the car. Some cars may also have lane sensors that send you a beep when you veer off course. Not being able to maintain a solid lane position is a major sign that you’re too drowsy to stay on the road, and the situation is becoming more serious.

HOW CAN I PREVENT IT?

The best response to drowsy driving is to prevent it in the long term.

As the information above shows, getting 6 hours of sleep or less per night will double your chances of falling asleep at the wheel. If you feel you may be susceptible to drowsy driving then aim to get at least seven hours of sleep per night, and ideally 8 hours.

STICK TO A SLEEP SCHEDULE

Going to bed and waking up at different times will confuse your body clock, and upset your circadian rhythms, both of which will lead to you feeling groggy and tired. Instead, aim to go to bed and wake up at the same time each day.

Drinking and driving is never advisable, but even if you are below the legal drinking limit, the glass of wine with dinner will leave you feeling sleepy.

NO MEDICATION THAT MAKES YOU SLEEPY

Naturally, medication can have major impacts on your drowsiness. Even if drowsiness is not listed as one of the predominant side effects, it can still have an effect on your overall levels of focus. If you are on medication then try and limit your driving to short journeys during the day.

SPEAK TO YOUR DOCTOR IN CASE YOU HAVE A SLEEP DISORDER

If you regularly feel drowsy when you drive, or just in your general daily life, you should speak to a doctor, or even a sleep specialist, as you may have a sleep disorder.

WHAT SHOULD I DO IF I AM DROWSY DRIVING?

If you do find yourself drowsy driving, then you should act immediately. Of course, the best thing to do is to stop driving and let someone else take over. However, if that doesn’t work, there are a few steps you can take to make yourself feel better.

The CDC recommends pulling over at the side of the road and taking a short nap. Even a sleep of 15-20 minutes will help you to feel more alert, and therefore to prevent you from falling asleep at the wheel. This is only a temporary solution, so the goal should still be to terminate your journey as soon as possible.

CHAT WITH A PASSENGER

If you are with a passenger who can’t or won’t switch driving duties with you, then just chatting will help to keep you mentally alert. Letting the other passenger know that you’re feeling drowsy will give you a second pair of eyes on the road.

Coffee contains caffeine, which acts as a stimulant. Drinking coffee will help stave off the symptoms of tiredness, although won’t act as a long-term solution to the problem. When the caffeine wears off, you may feel even more tired than you did in the first place.

SPEAK ON THE TELEPHONE

This solution should only be used in emergencies, and only if you have a hands-free kit in your phone. Calling someone may help to perk you up, although you run the risk of being further distracted from the road.

This is the most important step to take if you find yourself tired driving. Although the natural temptation is to get to your destination as quickly as possible, drowsy driving greatly slows your reaction time if you have to brake or steer. Pull into the inside lane of the freeway and slow right down. If you’re on winding roads, give yourself plenty of time to react to turns in the road.

Having a light snack can help keep you alert, giving your body a little burst of energy. However, it’s a fine balance, as eating too much will cause you to become more lethargic and sleepy. Try and avoid anything too carbohydrate-heavy, and nothing larger than a snack. Combining this with some coffee is the best solution.

Sometimes the feeling of sleepiness is due to the feeling of warmth. Opening the window to get some fresh air will help let your brain know that it’s not time to sleep.

TURN ON THE RADIO

Putting on some of your favorite tunes, podcast, or news will help keep your brain active, and may (counter-intuitively) keep you focused on the road.

Driving when you are tired is almost unavoidable in a world where we sleep less and drive more. However, tired driving can become drowsy driving, and very quickly become unsafe.

THE THREE MAIN DANGERS OF DROWSY DRIVING ARE:

So, if you wouldn’t drive after drinking, then you shouldn’t drive when you’re drowsy, as tiredness and alcohol both have the same impact on a driver’s cognitive function.

IF YOU CAN’T AVOID DROWSY DRIVING, THEN BREAK YOUR JOURNEY INTO SMALLER CHUNKS BY TAKING REGULAR BREAKS.

The Schmidt Salita Law Team has offices through out the State of Minnesota.  Its primary location is at Ridgedale Office Center in Minnetonka, near the intersection of I394 and I494.  The offices offer handicap accessible with ample parking.