Have you or your loved ones been exposed to TRICHOLOROEHTYLENE (TCE) 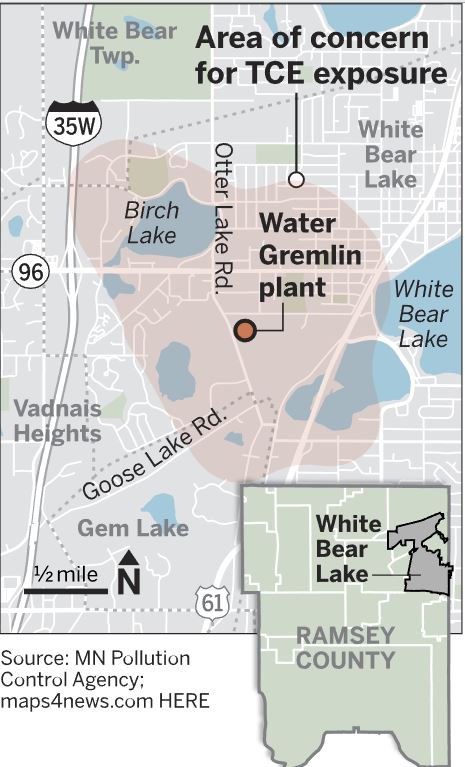 The Schmidt-Salita Law Team is committed to bringing justice to the victims of exposure to the chemical TRICHOLOROEHTYLENE which has been released into the environment in White Bear Lake area.  It has a long history of representing the victims of chemical exposures and, specifically, cancer victims.

Salita currently serves as the Chair of the Minnesota Trial Lawyers committee on Workers Compensation.  He also chairs the Occupational Exposure Group of the Workers’ Injuries Law & Advocacy Group (WILG) which is a group of lawyers who are dedicated to the representation of the victims of chemical exposures in the workplace and focuses on bring justice to the victims of toxic torts.  Salita has successfully represented workers who are the victims of chemical exposures against such large corporations as Honeywell, 3M and other major Fortune 500 companies in cases in Minnesota state courts, U.S. Federal Courts, and Minnesota Workers Compensation courts.

The Schmidt Salita Law Team includes veteran investigator Bob Olson who has experience in the investigation and coordination of mass tort claims focusing on mass and toxic torts including the pharmaceutical industry.

The Law Team includes Molly Olson, a legal assistant with 21 years experience.  Molly is the Erin Brockovich of the team.

The Water Gremlin Company is a manufacturing company located at 4400 Otter Lake Road in White Bear Lake, Minnesota.  It is believed to have been in existence since 1949, as a supplier of recreational fishing products, including lead sinkers. In the 1970s, the company began production of terminals for lead- acid batteries and has used the chemical Trichloroethylene (TCE) as a degreaser of metal parts. It was recently reported to have 218 employees.  In 2005, water gremlin was purchased by Okabe Co. Ltd, which is a Japanese company with affiliate businesses in China and Italy.

During the summer of 2018, the Minnesota Pollution Control Agency (MPCA) discovered the company was violating its air pollution permit.  In January of 2019, it demanded that Water Gremlin shut down part of its operation because it was emitting high levels of trichloroethylene into the air.

The MPCA determined that, at times, the emissions nearest the plant were found to be as high as 100 times the state’s health guidance value for trichloroethylene, which is 2 micrograms per cubic meter of air. The MPCA has stated that it believes that Water Gremlin has been releasing excessive levels of the chemicals since as far back as 2002.

The affected area extends 1.5 miles from the plant in all directions, including at least two schools and the homes of about 5,500 residents.

Residents of the area have reported a higher than normal incidence of cancer, neurological, pulmonary and other health issues.

Trichloroethylene, TCE, is an industrial solvent that is used in both industrial applications, and also found in industrial chemicals and household products such as paint and stain removers, cleaning products and parts cleaners.

It is usually in a liquid form but is highly volatile and can easily evaporate and become airborne. When that happens, the admissions can be harmful to breathe and can cause serious and potentially deadly effects.

Various cancer types are among the most dangerous of the problems resulting from TCE exposure.

Studies have shown that TCE produces central nervous system problems with decreased appetite, gastrointestinal irritation, headaches, mucous membrane problems, and skin irritations. It can also cause chemically driven liver damage due to either inhalation or ingestion. Abnormal heart rhythms are known to be induced by heavy TCE exposure.

Most importantly, there are serious potential carcinogenic (cancer) effects from TCE exposure. Medical researchers indicated that there is an increased incidence of both malignant and benign tumors as a result of TCE exposure in animals, acting through the same mechanism that would likely cause cancer in human beings. Several studies have also found a definite link between childhood leukemia and non-Hodgkin’s lymphoma.

FINDINGS OF THE STATE INVESTIGATION

The Minnesota pollution control agency conducted an investigation which resulted in the following findings:

SETTLEMENT BETWEEN WATER GREMLIN AND THE STATE OF MINNESOTA.

On March 1, 2019, Water Gremlin Company entered into a stipulation agreement with the Minnesota Pollution Control Agency whereby it agreed to pay more than $7 million in fines for emitting high levels of toxic chemicals into the air over many years.

The settlement is recognized as a second largest fine in the history of the Minnesota Pollution Control Agency.

As part of the agreement, Water Gremlin Company agreed to remove all TCE from its facility and to not use it in the future.

The Schmidt Salita Law Team is currently accepting cases for the victims of Water Gremlin suffering injury and or death on a contingent fee arrangement.  That means that the client will not be expected to pay any attorneys fees unless there is a settlement and then only as a percentage of the settlement.