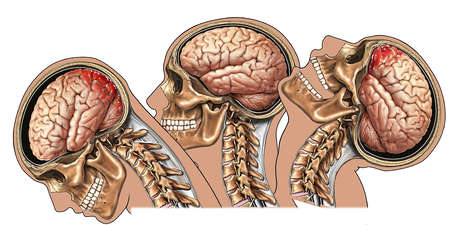 Doug Schmidt is the senior trial lawyer at the Schmidt Salita Law Team, with over 40 years experience in bringing justice to the victims of concussion injuries and traumatic brain injuries.

The following is a excerpt from the forward to his upcoming publication:

Schmidt’s initial interest developed in his practice of representing the victims of personal injury in motor vehicle collisions and workplace injuries.  He interest in that subject was perked by his involvement in youth hockey back in 1997 when he served as President of District 6 Youth Hockey.  He became aware that concussion injuries were being overlooked and underappreciated.  He worked with a select few of people, at that time, were focused on the problem of overlooked concussions in youth sports.  Schmidt came into contact with Dr. Michael Stewart of the Sports Medicine Department at Mayo Clinic and others who worked in the development of concussion recognition protocol.

Since then, Schmidt has lectured extensively to other lawyers, medical doctors, and chiropractors on the subject.  Schmidt has now collected his experiences, knowledge and research into this informational document.

I have been working closely with the victims of personal injury for more than 40 years.  Since I first began, there have been many changes.  No such change has been so dramatic as the change in the recognition of the significance of concussion injuries/mild traumatic brain injuries.

During those 40 some  years, it has been apparent that the medical world has been  ignoring the many serious and permanent  consequences  that result from  concussions and mild traumatic brain injuries.

In the last 5 years, I have been blessed to be associated with highly trained medical specialists in cases where the mild traumatic brain injuries were initially overlooked, but the clients had suffered significant permanent disability-disability  which was later confirmed by these  highly respected medical specialists.

This experience led me to delve into the medical literature in an attempt to understand this huge dichotomy .  The result of that research was shocking.  I discovered that the respected medical research recognizes that concussion injuries are a huge medical problem while the medical community in daily practice is ignoring it with an apparent lack of understanding and appreciation of the magnitude of the problem. Simply stated, “Its all there in the medical research, i.e. understanding and appreciation of the significance of concussion injuries.  It’s not there in day-to-day medical practice. There is a night-and-day difference between the medical literature and the day-to-day medical practice.”

The world has only come partially out of the “dark ages” regarding concussion injuries. We have recently come to accept the magnitude of the Chronic Traumatic Encephalopathy in professional football players. That is true even though the research has been there, but largely ignored, for 30 years.

The purpose of this work is to explore that curious concept of how and why the medical literature conveys a so completely different message from that which is employed in  actual practice by the large majority of the health care community that continues to ignore this valuable research and knowledge.  Additionally, the goal is to summarize and bring to light the true state of the actual medical research that is so sorely ignored..