MINNEAPOLIS AIR BAG INJURY LAWYERS announce a $473,105.10 arbitration award for a woman who sustained an injury from an airbag deployment. 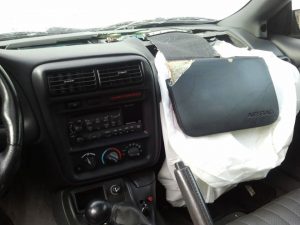 Minneapolis Air Bag Injury Lawyers at the Schmidt Salita Law Firm announce a large award for airbag injuries sustained by their client who was a front seat passenger in a single car collision.  The driver lost control because of sleep exhaustion.  The car left the roadway and slammed into a concrete wall.  The airbag deployed causing injuries to the passenger’s head and face.

MINNEAPOLIS AIR BAG INJURY LAWYERS were able to recover a settlement for their client even though the driver was uninsured.  Recovery was obtained against the client’s own insurance company under the Uninsured Motorist coverage.

The client’s Uninsured Motorist insurance company, Geico, refused to make a decent offer of settlement.   Schmidt Salita lawyers invoked the arbitration clause in the insurance policy.  The case was contested before a 3 arbitrator panel that considered evidence in a abbreviated manner to that which would occur in a District Court case.  The panel returned the award of $473,105.10.

The client was very pleased with the result.

That is because they prevent life-threatening, fatal injuries.  But there is a trade off.  They also can cause serious, but not life threatening, injuries to the face, head and chest.  That is exactly what happened the the Schmidt Salita client in this case.

Seat belts are also intended to prevent life threatening injuries, but can cause serious and permanent injuries to the lumbar spine and to the upper back and neck.  The lap belt portion of the 3-point seat belt system restrains the lumbar spine at one level, causing a shear force to the lumbar spine above and below which would not happen if the seat belt were not used.  The upper body shoulder belt that crossed from the left shoulder to the right hip causes a twisting shear force to the thoracic and cervical spine that would not occur without the seat belt (or would not occur with a 4 point system that restrains both shoulders).  That twisting shear force can cause serious and permanent damage.

The Schmidt Salita Law Team has over 70 years of experience with a wide variety of personal injury and wrongful death cases. They are experienced with No Fault Insurance claims and “At Fault” claims against the negligent drivers who caused car accidents and truck accidents.